Successful weekend not only for the showjumpers but also for the «reiners» at castle stable: Stephie Hasler and Holly (Colonels Black Pearl) were competing in the discipline Reining at the NRHA 3-Nations-Show at the Horse Academy in Mooslargue (France). After a 3-year-baby-break (of the horse, not the riderJ) they came back into the reiningarena, competing in the professional level «limited open» and reached – with a very good score of 70.5 – the 3. Place!

Reining:
also called the royal discipline of all western riding disciplines. Since 2002 reining is acknowledged by the FEI as an official discipline. Reining has ist origins in the early westamerican ranch work where a one-handed-guidable and responsible horse with quick movements was absolutely nescessary. To control the cattle, movements like stops and turns were needed. Over the time, these movements developed more and more into independent maneuvers, wheras today, they build the heart of reining. One of the founders of the discipline reining, Jim willoughby, defined reining as followed:
«To rein a horse ist not only to guide him, but also to control his every movement. The best reined horse should be willingly guided or controlled with little or no apparent resistance and dictated to completely» à minimal signals with maximal control. Deviations of the given pattern mean a lack of control and will be punished with penalties. Credits on the other hand will be given for smoothness, elegance, appearance, speed and style. In the show, horse and rider have to perform one out of 13 pattern in which the order of the expected maneuvers are defined.

Scoring:
It starts with a score of 70 (nobody knows why 70 J). Every single maneuver is scored seperately. A correct, exact and smooth maneuver is 0. For extra speed and risk without visible impact of the rider, extra points can be given (+ ½, +1, + 1 ½). For poor maneuvers points can also be reduced (- ½, -1, – 1 ½). Additional penalties will be given for faults of the pattern (trott instead of lope, wrong-hand-lope, overturn/underturn…)

NRHA:
National Reining Horse Association (there are affiliates in every country, NRHA Switzerland counts about 300 members)

Horse Academy:
One of the most professional show- and trainingfacility in europe, located in alsace, France and owned and run by swiss people. Two self employed reining trainers are working at the Horse Academy, one of them is the canadian trainer Morey Fisk, world no 2 in 2018 (Stephie was working as his co-trainer in the years 2014 and 2015). The NRHA conducts around 8 to 10 reining shows a year at the Horse Academy where riders from all over europe are competing. 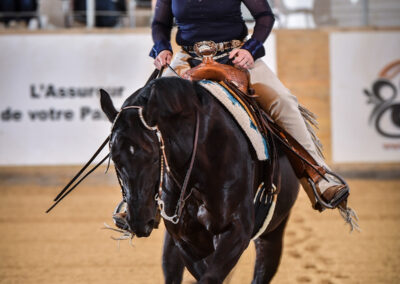 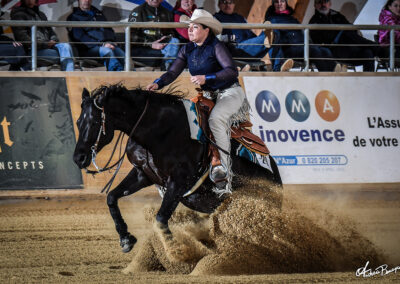 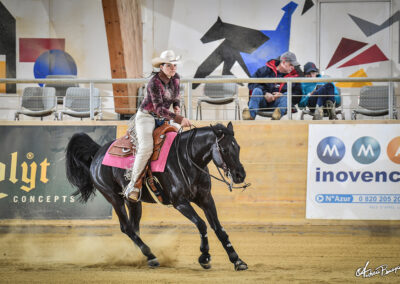